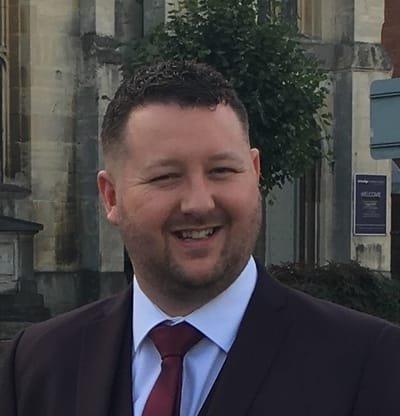 Gareth was born in Glasgow in 1981. He began playing Trumpet and Piano at Clydebank High School and went on to study music at the Royal Scottish Academy of Music and Drama,      graduating in 2003 to become a music teacher with a 1st class honours degree and a merit in teaching. In 2006, Gareth was appointed Principal Teacher of Music at Greenock Academy and in August 2011 took up same role in the newly formed Clydeview Academy in Gourock,   Inverclyde. Gareth moved to a Depute Head Teacher post for 5 years and in August 2018  decided to return to the classroom as Teacher of Music allowing him to focus on music education and other musical projects out of school. After 13 years in Inverclyde, Gareth took up a teaching role with South Lanarkshire Council.
Gareth has directed numerous school ensembles including Wind Bands, Orchestras, Ceilidh Bands, Jazz Bands and Choirs as well as taking on the role of Musical Director for numerous school shows. He is also an experienced pianist and accompanist and has performed on Soprano Cornet, Bb Cornet, Flugelhorn and Tenor Horn with numerous brass bands.
Gareth has conducted the Coalburn Silver Band since 2004 and has led the band through one of the most successful periods in its history. The band has won numerous awards and progressed from the 4th Section to the 1st Section. The band organisation has developed a progressive structure including a Percussion Academy, Children’s Band, Intermediate Band and Senior Silver Band.
In 2009, Gareth won the NABBC (Scotland) Conducting Competition held at the RSAMD. Gareth joined the tutor team with the     National Youth Brass Band of Scotland (Reserves) in 2013 and continues to enjoy tutoring at the annual summer course.
Gareth has previously adjudicated at the Aberdeen, Inverness and Glasgow/Edinburgh Scottish Concert Band Festival regional events, National SCBF Finals in Perth and at the Borders Brass Band Entertainment contest.
In April 2019, Gareth was delighted to take on the role as Resident Conductor with The Kirkintilloch Band.